Making headlines recently is the Australia Government proposed new laws that would see tech giants Google and Facebook pay local news publishers to receive the rights to list news articles on their search engine and social platforms. Stemming from the discovery that both platforms appear to not be paying adequate taxes in Australia, profiting their bottom line (a story for another day).

As a result, Facebook has blocked all news sites from its platform and Google threatened to remove their services from Australia entirely.

Can you imagine a world without Google? No Google search? No google maps?

In August last year, Google issued Australians with a statement on their home page: 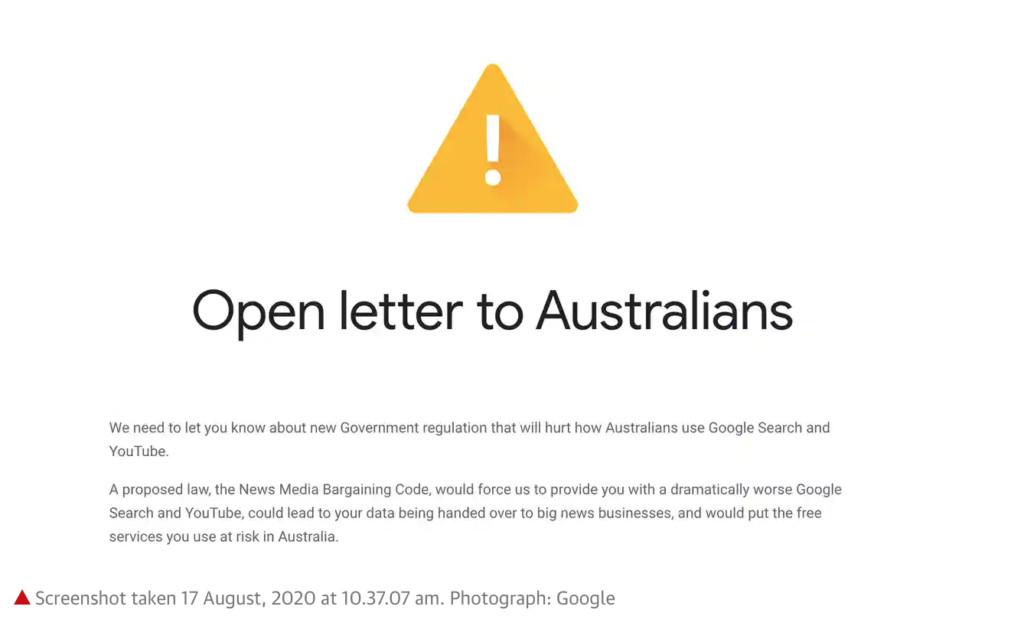 Right now, no website (or search engine) in Australia pays to show links to other websites. The proposed law by the Australia Government would change that, making Google pay to provide links in their search results. If the law requires Google to pay to link people to news websites, it’s likely to cause a slippery slope of demands for payments to other types of links.

In an age where we have come to rely on these platforms to highlight, on a daily basis, anything newsworthy to keep us informed, it’s a double edged sword because it’s all at no cost to the consumer – it’s distributed free. This affects the profitability of news publication companies who are, as a result,  increasingly beginning to offer paid subscription only access to their news content – in order to keep their business profitable.

The proposed new News Media Bargaining Code laws by the Australia Government would see Google and Facebook pay news publishers for using, referencing and distributing news content on their platforms.

Yesterday (Feb 18) in a ground breaking move, Facebook blocked all Australian news from its platform.

The news pages still exist but, no posts are available. (See example: 9NewsMelbourne). So you won’t be seeing any news articles in your Facebook news feed at the moment as our Federal Treasurer Josh Frydenberg and Mark Zuckerberg fight it out.

Prime Minister Scott Morrison has slammed Facebook for, in the process of blocking news sites, blocking pages that contained vital public information like Fire and Emergency services, Health and safety and Mental Health related pages, putting Australian’s at risk (access to some of these pages has since been restored) however, some other small businesses have also been affected by these measures.

Compromises are being made.

In response to the Australian Government’s demands, Google has launched its latest product: News Showcase. The intention of this new product is to pay news publishers for the articles that will appear on certain Google services in a new feature – story panels. As an extra feature, this will grant consumers access to selected ‘subscriber only’ articles. Showcase will only be available on the Google News App, as well as Discover (for android). 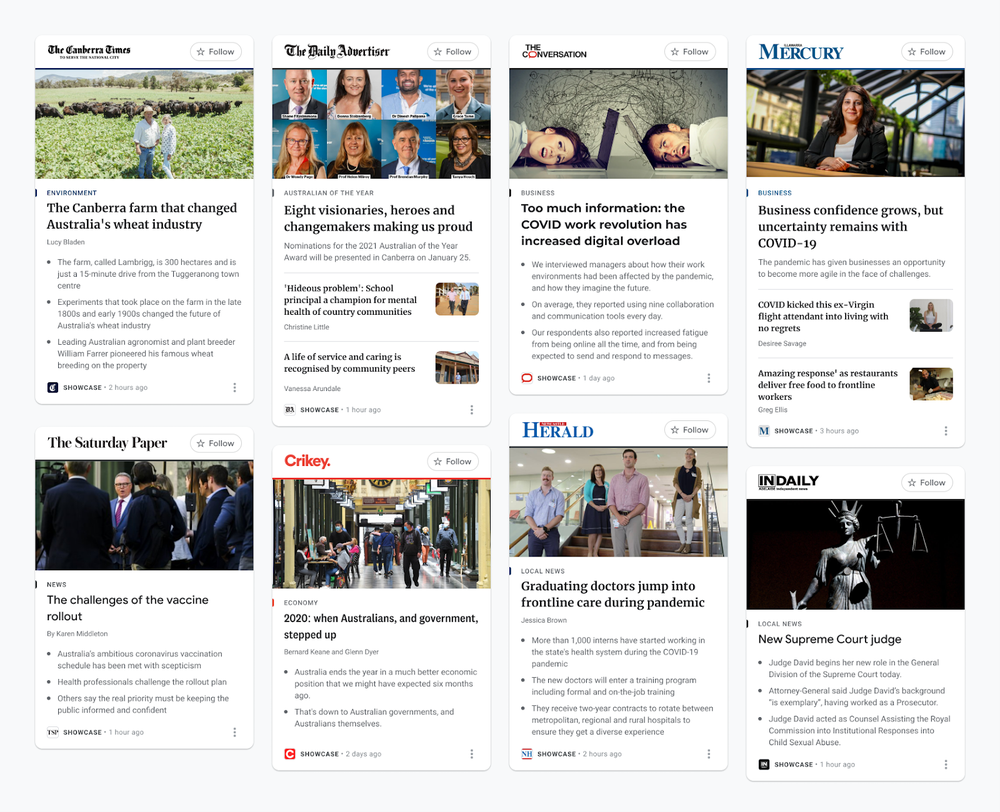 Several news publishers are reported to be close to closing a deal with Google Showcase, with 9News the latest to agree to a deal for $30million a year.

So, do you think these platforms should pay news publishers every time a news story shows up in search results or on social media?

The Australian Government and Facebook are currently in discussions and it is too early to know what the outcome will be and if Facebook will reverse its decision to block all news sites from its platform.

It’s also unclear if the proposed News Media Bargaining Code laws will even pass the senate.

At a time where misinformation is arguably circulating more than ever, needless to say the impact of this turf war is far reaching, not only for Australian news publications but for many companies in Australia who share and redistribute news.

It’s hitting small country town news publishers hard, where the impact of us becoming reliant on Facebook for news has reduced their circulation to the point that they’re not financially viable anymore.

This debate and the circulation of information (and misinformation) has resulted in Google and Facebook moderating and censoring their platforms by identifying and blocking “fake news”, most notably during the latest US Election. Which could leave you questioning their position of power and pose the question of blocking any “news” whatsoever is more convenient – preventing the need to censor or moderate news at all.

So where do we get our news from now?

Majority of us have come to rely on Google and Facebook as a reputable source of news and information. Yet as the moderation, censorship, and now withdrawal of news from its platforms has taken place, we are left wondering where and how do we obtain facts on public information, local and world events now? Are these platforms who are moderating content, really passing on (all the) credible articles?

New social platforms and search engines (Duck Duck Go, Caffine, Vera, Periscope etc) are seeing more of the market share as these issues progress, so we could be seeing a shift in consumer preferences sooner rather than later.

Our suggestion to business owners is to start reviewing how your business is ranking on other search engines like Bing to make sure you’re getting the best results as other platforms gain momentum.

On the other hand….

On the flip side to this argument, news platforms aren’t receiving their subscription fees because Facebook and Google are sharing the free news networks (and we all choose to click the links where we can read these articles for free) so, some publishers are losing coin (which probably means one less private jet for some ????) but will eventually flow down to the journalists who will realistically suffer the consequences.

This is a sensitive and complex issue and at the end of the day this is a loss for the people.

Facebook agrees to restore Australian news after the government agreed to make changes to the Media Bargaining Code.

So, what does this mean for you and your Facebook page?

The good news is, Facebook has reinstated all deleted pages, so you’ll be able to see news content on your feed again! But while it took only a matter of hours for news to be removed from our feeds, it’s taking far longer to build it back again. So, if your page was deleted due to these changes and still hasn’t been reinstated, don’t panic – it should come back in the next couple of weeks.

What if there’s certain content Facebook doesn’t want to pay for? How will this be resolved? These are all questions that will need to be addressed in the future. But at least for now, Facebook will pay news publishers for their content, and we get to see news content on our feed again!

Here are some resources to give you the low down:

If you want to receive monthly emails from the Evolution team with our latest blog post, hot off the press, please sign up here.

8 local businesses to shop with this Christmas

Join for a monthly dose of evolution

Do you want to evolve? We’ll be your virtual digital mentor!

Every month we’ll send an email with our latest article, studio updates and some bite sized facts to help you grow.

Other bits and pieces

You’re amazing at what you do, so leave the Branding, Logo Design, Website Design and Development, SEO, Graphic Design and Marketing Strategy Development to our creative digital agency!